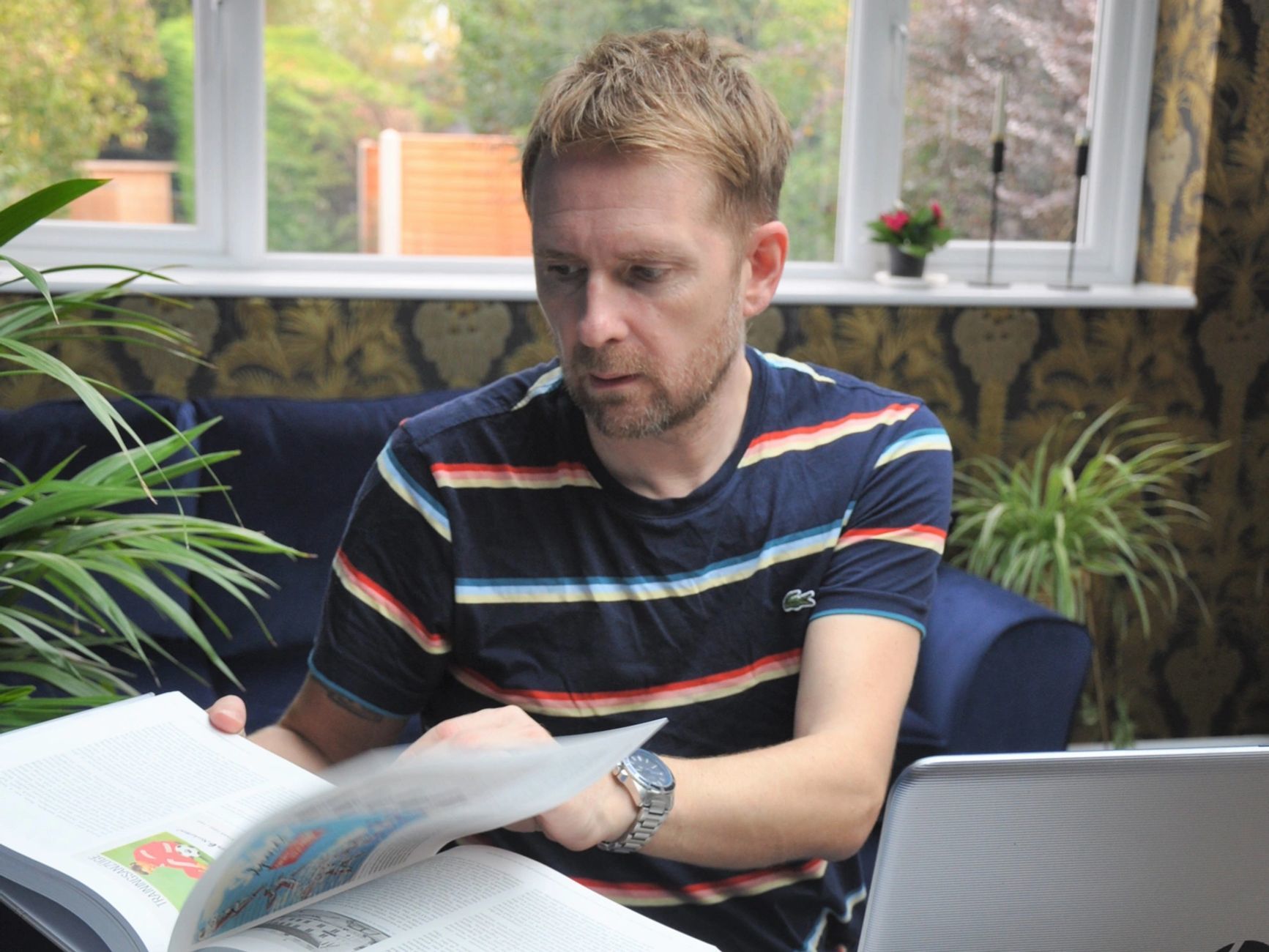 A lifelong fan of the brand Adidas, Vaal & Vaal member Neil Selvey began what he called a ‘hobby project’ some years ago to simply find out more about the brand and business he was so passionate about.

What happened over the course of 24 months is something quite phenomenal – from visiting the Adidas HQ in Germany, unearthing shoes that were not even listed in the manufacturers archive, and uncovering the very last pair of Olympic Adidas shoes from 1972 Munich Games.

With no financial backing, publisher, or advertising budget Neil published the sell-out book – From Past to Present – A Timeline of the Three Stripes – and received a raft of personal messages of congratulation and gratitude from some of the most iconic shoe designers that have worked for Adidas.

With a growing waiting list of orders, and regularly referenced in the work of fashion students around the globe, our Founder Raps Gill caught up with Neil to find out more about the book.

Tell us a bit about the book and what inspired you to undertake the project?

From Past to Present – A Timeline of the Three Stripes is a visual history of the Adidas training shoe from early classics such as the Rom, Superstar and Gazelle to contemporary releases such as Boost, Yeezy and FutureCraft.

It tells the story of how Adidas evolved from a small family run business to the giant global corporation it is today – charting everything from the technological innovations in shoe design, business decisions which made the brand the number one choice for athletes, and how training shoes have become a staple of the fashion industry and everyday wear.

It is a hardcover bound coffee table book, 250 pages, 25,000 plus words of text and is illustrated throughout with photographs of over 1,200 trainers from the archives of over 60 of the worlds most renowned adidas collectors.

The project came about through my own passion for the Three Stripes. Over the many years I have been collecting, I have met people from all of the world who are just as obsessed as me and to the put their collections into a single volume was an amazing experience and opportunity.

Where did you start?

I was approached by a collector from Hong Kong who wanted to put together a book about Adidas collectors. As I had already written articles for magazines and websites on the subject, he asked me if I could add historical writing about the shoes, and we enlisted another Adidas fan who is a magazine designer to help with the layout. Originally, we started out with just twelve collectors but as the project grew so did the number of passionate collectors involved.

Some shoes had to be in the book because they are significant from a technological, cultural, or aesthetic point of view. So, the first thing I had to draw up was a list of the key models from the brand.

However, those shoes only told part of the story. We are talking about a company with seventy years of production history, who made shoes for pretty much every conceivable sport and sold their products to the far reaches of the globe. In fact, they have made so many shoes, not even Adidas know many different models they’ve produced!

I wanted to present an eclectic mix, so sitting next to classics such as the Gazelle, Stan Smith and Samba are a pair of canoeing shoes worn by an athlete at the Munich Games, shoes produced under licence in New Zealand and shoes so rare that only a single pair are known to still exist.

Did you set out with a vision of what you wanted the finished article to look like?

I always knew what type of book I wanted to produce, but it evolved over time. We kept turning up new shoes and we were like “that has to go in the book!”

It is impossible to put every single Adidas shoe ever produced into a single volume, but we wanted to give the customer good value for money, so we kept packing in more and more shoes and information. I didn’t want to produce a book which you could look through in half an hour and say “that was nice”, but never pick it up again. It is a reference manual that you can keep coming back to again and again.

How long did the project take?

The project took two years from concept to print to put together. When your working with 70 people it is never going to be quick. I didn’t think it would take that long; I’d initially thought maybe a year. We could have put something out a lot quicker, but we wanted to do a proper job and leave a lasting impression, so we kept working at it.

What was the biggest hurdle you had to overcome?

The biggest hurdle was probably sourcing all the shoes. Some shoes are so incredibly rare. We are talking about shoes that are maybe 40 or 50 years old, so sourcing a pair is a task in itself.

Then you have to get the shoe photographed and research and write about it, it’s very time consuming. I would have loved to travel around the globe taking photos of trainers, but time and money constraints meant I had to rely at times on others to photograph their collections.

As a hobby project no-one is working to a strict deadline and people have all sorts of commitments in life, so sometimes it was just a case of waiting!

What was the most defining moment of this project?

I didn’t really feel there was a turning point until near the end when I was at the designers house and we are going through the final page layouts and I’m thinking wow this is really happening, this is going to print!

Then you have to print it, promote it, set up an ordering system, set up a website and deal with parcel couriers. This was 100% a hobby project, no financial backing, no publisher, no advertising budget, no staff to help, no warehouse to store the books in. It was a case of learning as you went along!

What role did Adidas play in the project?

I visited Adidas in Germany a few years before I started this project to try and sell them a similar concept. They were very nice to me, but ultimately talks didn’t lead anywhere. I guess they got a lot of requests for collaboration work.

Still, being an Adidas obsessive it was an amazing experience to visit their HQ and see how they work and I also got a tour of their archives where they have shoes signed by the world’s best athletes and prototype models – I saw so many amazing shoes.

After the book went to print, we have had orders from Adidas managers in Germany, the UK, USA, France and Hong Kong. We’ve had some very heart-warming compliments about the quality of our work from people like Gary Aspden who co-ordinates the Spezial range for Adidas, Chris Severn who helped create the famous Superstar shoe and Jacques Chassaing who designed the ZX running shoe range for Adidas France in the 1980s.

What was your lowlight and highlight?

Lowlight, definitely would be the amount of time I’ve worked on this project. As a hobby project, I would come home from my day job and spend all night working on the book. A massive chunk of my leisure time for two years was completely taken up.

But that leads to the highlight, because once you have done something this like this, it is there forever, no-one can take it away from you. I feel immensely proud of it as a product and to get emails from fans from all over the world telling you how much they love the book – that definitely makes up for all the lowlights and hard work.

What has the response been like since publishing, key learnings for yourself?

The response has been amazing, we’ve nearly sold out and so many people have contacted us telling us how much they’ve enjoyed it. We’ve sold copies to fans in Australia, the USA, Canada, Japan, Sweden, Italy, Malaysia, all over the world really.

We even have copies in academic libraries at universities. I never wrote it as an academic book, but when you get messages from people saying they have used the images or text for reference in their fashion design course that makes you feel pretty proud.

I definitely learnt a lot from the experience, there are aspects that went well and aspects that didn’t work well. If I did it again, I know I would approach it from a better perspective and not make the same mistakes.

Any plans for future books?

I don’t think you can achieve much in life without putting some hard graft in. There were times when I could have quit, as the project was incredibly time consuming. But I’m so glad that I saw it through to completion. I’m not the first to write a book about sports shoes but I always knew we could put out an amazing product if we worked hard at it and we knew there were plenty of people out there that wanted this type of book. So my advice would be; know your target audience and set out what you want to achieve, set the highest possible standards you can meet, work hard and don’t give in.

I honestly wanted to take a break for a bit, but I’ve already finished a new project in collaboration with adidas for the 50th anniversary of the Superstar basketball shoe. I’m also working with a colleague on a new project and have plans for a title celebrating the European Football Championships in 2021.

The book is now sold out.  Due to this we have closed down our order website.  However if any Vaal & Vaal Member would like to purchase a copy they can message me directly at adidasbook@hotmail.com.